What is your first memory of Porsche?

My first recollection of a Porsche was attending race meetings at Warwick Farm and Oran Park, seeing them parked in the paddock and on the track. I also remember feature articles in magazines such as Road & Track, Sports Car and the Porsche publication Excellence.  The best thing, I actually still have these publications.

How did you hear about Autohaus Hamilton?

A work colleague and fellow MG enthusiast also had a 912 that had been upgraded with a 6-cylinder engine, unfortunately the vehicle was stolen, which later enabled him to move to a Carrera 3.2 with a G50 gearbox.  I recall the purchase was organised through Autohaus Hamilton, however, whilst getting his car serviced he heard that an SC would be coming on the market so I contacted Scott (Sales) and arranged an inspection.

After a few inspections, a test drive and a conversation at home, as there was already two other sports cars in the garage. Lucky for me the discussion ended in my favour and the deal done in 2010.

Have you enjoyed it since, do you have any fond memories?

The SC was purchased for club runs and transport to the mid-week car race meetings at Wakefield Park (GEAR), it’s always been a real buzz driving it, especially through places such as The Southern Highlands. It really does fit the bill for any occasion.

I know you’ve done a few tasteful DIY jobs at home, can you tell us more about them?
A car enthusiast never stops fiddling, both front guards have been removed and the flaying surfaces cleaned and fish-oiled, new carpet fitted to the luggage compartment, replaced front windscreen, new rubber fitted to rear window, high level brake light installed, new timber toe board made for passenger’s side and the back seats reupholstered to match.

You’re right, a car enthusiast never stops. So, what’s next for the SC?

Unfortunately during a recent service at Autohaus Hamilton, two broken head studs were detected. This will require the engine to be removed for a top end rebuild, however it will enable an engine bay clean up. It will be nice to inject some love towards the engine bay’s sagging sound proofing and to rectifying the thermostat oil leak.

With that complete your car really will really be something special, but this isn’t the only special car you have, you’ve also got an MG?

I have love been a sports car fanatic having purchased a new MG midget when I was 20, this led to a procession of MG’s with a fully restored concours MG ‘A’ having pride of place in the garage.

A long love story there. Last but not least, if you had to describe Autohaus Hamilton to a stranger, what would you say?

I have found the team at Autohaus Hamilton to be very professional in their dealings with a depth of knowledge in the German brand, I consider their judgement honest and do rate them most highly.

Some photo's of Tony's last visit and major service: 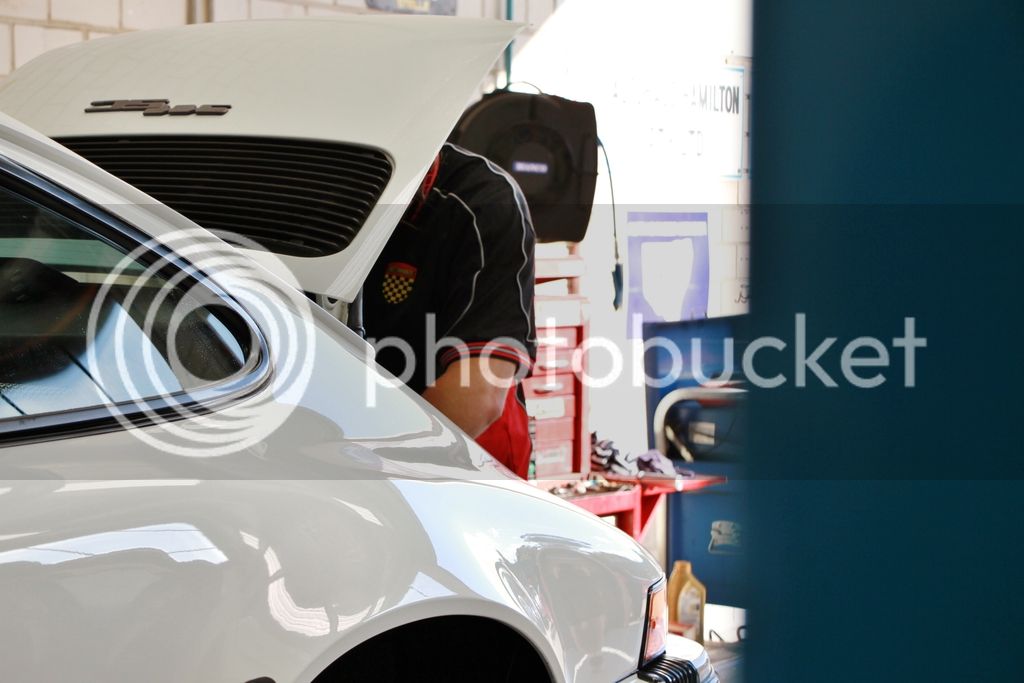