In The Haus, For Sale,

Received wisdom is the stuff that everybody knows.  In the same way that common sense isn’t very common, received wisdom is not very wise.  In the case of convertible sports cars, the received wisdom is that, because the roof has been cut off, the resulting car is as stiff as a piece of wet cardboard.  And we know this, because every time a motoring journalist drives a convertible, they tell you that it is less stiff than its coupe counterpart.  And while there is a nugget of truth there – cut a box in half and the resulting structure is certainly less stiff than it used to be – Porsche’s designers and engineers know about this, and deal with it.  And they deal with it very well indeed, because the truth is, even on rough roads, a 997 Convertible remains perfectly composed.

Then there is the received wisdom about GPS units.  This piece of wisdom says that with a GPS built into every smart phone, and portable GPS units being as cheap and good as they are, you don’t want to bother with a built in GPS.  By now, you won’t be surprised to learn that the built in navigation in a Porsche has certain advantages over a mobile unit.  The user interface has been designed to be used in a car, so it’s actually easier to use than the interface in my own Garmin unit.  There are two other pleasant features: the nice lady turns the music down before telling me where to drive, and then turns it back up again when she is finished and she also places a map schematic in the instrument display.  These are mostly simple to read instructions like “take the second street on the right”.  But – nerd joke alert! – the symbol for a freeway exit appeared to have been designed by a quantum physicist because it appeared to instruct me to go forwards and to the left, and back and to the right at the same time. 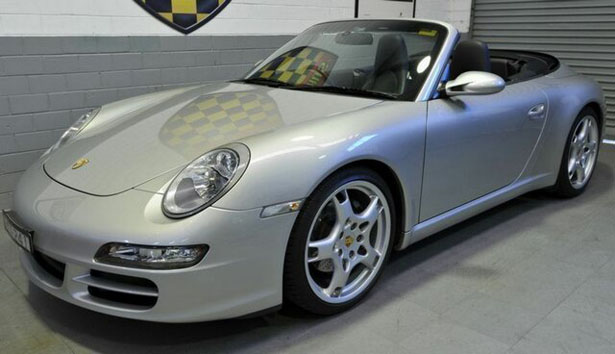 The Porsche Club Breakfast Run to Eastern Creek brought me hard up against the received wisdom in a 2005 Carrera Convertible.  This particular car has covered just over 18,000 kilometers in 7 years and really does feel like a new car.  Nothing squeaks, nothing rattles and it really is as tight as a drum.  Somebody is going to get what is really a very good car at an enormous discount over new car prices!

The other old saws that you will hear motoring journalists trot out when talking about any 911 is that it is a very easy car to place on the road with precision, and that the engine being slung out over the back makes the nose feel light, and that you can feel the front of the car bobbing about.  The first of these is absolutely true.  Better than just about any other car I can think of, a 911 does a wonderful job of telling you what is going on at the wheels.  All day long I could clip – or avoid – cats’ eyes at will, with perfect precision.

As for feeling the front of the car bobbing, that seems to be one of those received wisdom things again, that nobody stops to question.  Even when I tried to find it, it wasn’t there.  And now, confession time.  I’ve had my own prejudice regarding convertible Porsches.  I’ve always dismissed the 911 Convertible, figuring that if you wanted a convertible Porsche, the Boxster was the car to go for.  The truth is that the two cars really are very different, more different than the +2 seats that the 911 offers.  The 911 feels more substantial.  From the driver’s seat, even on gentle curves, the car somehow felt longer than a Boxster feels which may be my senses interpreting the effect of having the engine behind the rear wheels instead of behind the driver’s hips.

The trouble with things that everybody knows is that if you start to believe them, you deprive yourself of finding things out for yourself, and sometimes the things that you can find out make for a very pleasant surprise.

You can find the car which gave me such a very pleasant surprise on the Porsche Club Breakfast Run to Eastern Creek on our website here.